This opens the Process Selector dialog for choosing which process and version to initiate.

This is the Process Selector dialog: 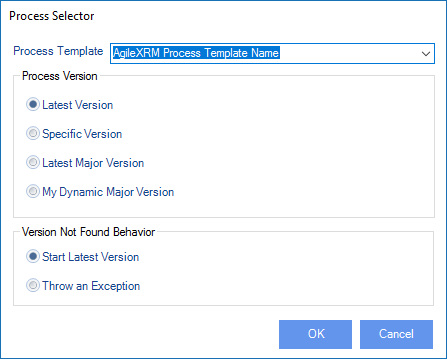 Process Template This drop-down list will show all the processes that are already published in the Process Engine (AgilePoint Server). Select the name of the process that you want to initiate as a sub-process.

Latest Version The process model version that has the status of Released is initiated.

When this is chosen, all the available versions (including ones with the status of Retired) are listed in the drop-down list. Select the specific version of the model that you want to initiate as a sub-process.

Version numbers are in the form Major.Minor (e.g. 4.06 or 3.50). When this option is selected, all the available Major versions of the selected Process Template are listed in the drop-down (including ones with the status of Retired). When the process arrives to this shape, it starts the highest Minor version of the chosen Major version.

For example, you have 3 related processes:

Let’s say you continue enhancing these processes and you then publish B 2.0 first and C 2.0 on another day. If the sub-processes shapes were configured with this option, new A process instances will continue initiating B 1.34, and B in turn would continue to initiate C 1.20. This is even though there are new versions of B and C available in the Process Engine. Once you publish A 2.0, then the new instances of A would initiate the new versions of B and C (i.e. 2.0).

Throw an Exception Rather than initiating the Latest Version, this option would cause the Engine to throw an exception at runtime when the desired version is not found. This way the System Administrator gets a chance to correct the error.