This document describes the usage of AgileDialogs from dialog-designer perspective.

With AgileDialogs, a designer can create dialogs or scripts to gather information from users and save this information either in Microsoft Dynamics 365 or other systems.

The terms ‘AgileDialog’ and ‘dialog’ are used interchangeably in the rest of the document. To avoid confusion, Dynamics’ own dialogs, are referred to as such, in italic.

An AgileDialog is a visually designed model comprising of a set of UI steps (Page Forms) and optionally, automatic system steps. The interface presents data and questions to an end-user to inform or get input from the end-user. The flow is modeled using MS Visio.

AgileDialogs can be used for many purposes, for example:

AgileDialogs can be executed standalone, meaning the dialog is not part of an AgileXRM process, or they could be part of a business process, that is, the execution of the dialog is a task assigned to an end-user.

From the end-user’s perspective, a dialog is a set of questions that he/she must answer in order to perform a task. Within the dialog, the user can go forward or backward in order to fulfill the required task. The dialog is presented to the end-user using an HTML5-based Dialog Render Engine.

These are the basic concepts that an AgileDialog designer must know.

An AgileDialog Model is a business process drawn and configured in Envision (MS Visio), used for “holding a conversation” with an end-user. This process is different from other AgileXRM processes, as all the tasks are executed synchronously by the end-user; there are no task assignments or tasks lists involved.

AgileDialogs can contain manual tasks (form Pages), decision points (based on context data) and automatic activities (to interact with XRM repository or other systems). 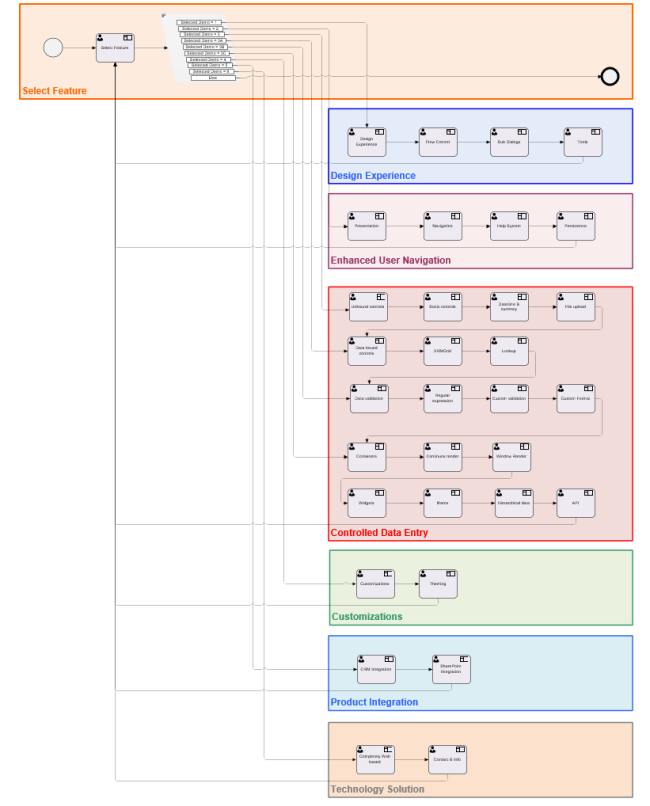 This is the basic unit of a dialog. Each question corresponds to a control (e.g. Textbox, List box, Radio Button, etc.) that is presented at runtime to show to or get information from the user. Each question has a caption, where the designer can specify the content of the question. Beside this caption, the designer can optionally add a tooltip and further help. The content of the controls can be static or dynamic. For example, there is a control that presents a grid using a query to retrieve data from the XRM repository.

Dialog questions are grouped in Pages (a Page is a form with a set of controls). Each Page is a step in an AgileDialog model as defined in Envision. Between Pages, the modeler can include decisions and automatic activities to control the flow and interact with the XRM repository or other systems. 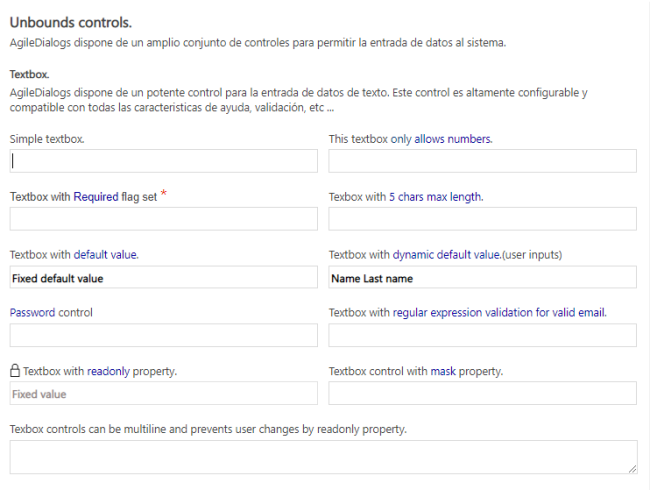 This is for calling an AgileDialog from another AgileDialog. It helps organize complex dialogs into manageable pieces, as well as for creating reusable SubDialogs that can be reutilized in different dialogs.
A SubDialog can be called at any point in the parent dialog (not just as the last step) and the Back-Next functionality works as expected between dialogs and SubDialogs.

All controls have a Required property, when this is TRUE, the user must fill the control to continue with the dialog. 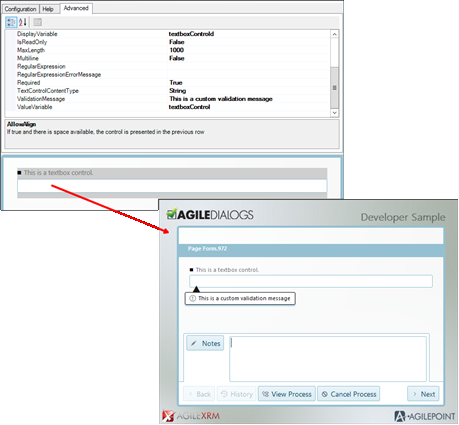 In the case of Text controls, there is specific validations to check max length for strings, validate using regular expressions or type (validate that a string is an integer, decimal). Additionally, the designer can include JavaScript code to perform more complex validations.

We also have the CustomValidationMessage property available for input controls that allows us to configure and locate a message for custom validations.

The dialog has access to a context. These are dynamic values which are used in the dialog.

The context available depends on these criteria:

The following 4 Preset Process Variables are only usable if the AgileDialog is executed as a Task in an AgileXRM Process, and help to interact with the parent process and the entity record it is managing: 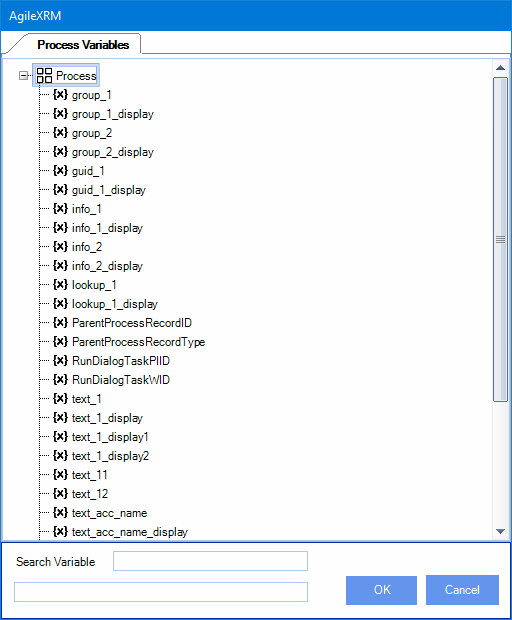 Besides these variables, there are generic purpose variables (image below): 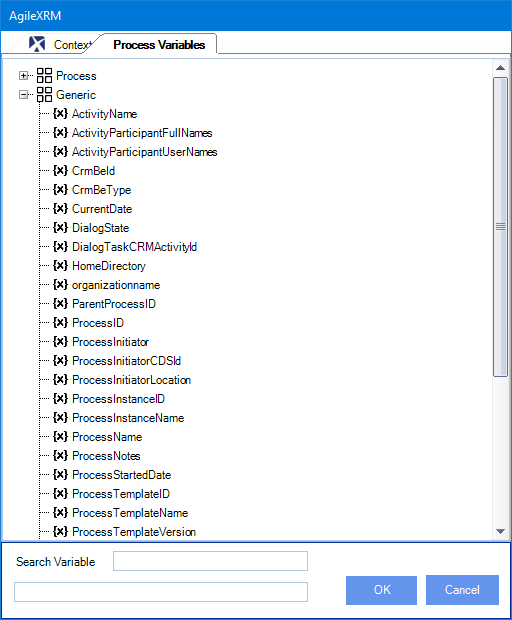 The most important ones are described in depth here:

This document list all available variables under Generic node

AgileDialogs Pages can be configured to be shown in three different types of views, from a User Experience point of view. When Designing an AgileDialogs Process Template, it is possible to manipulate the way that every Page Form is shown on Screen, for decorative / functional purposes. It is also possible to combine different types of visualization in a Process, as each Page Form has its own visualization setting.

To Change the visualization style for the Page, perform the following steps (Pictures below):

Figure 2. Once we are inside the Page Form designer, we click on “Options”

Figure 3. Once there, you can choose your preferred render mode for the current Page

The three view modes to be described are:

There is a specific Visio template to create AgileDialogs: 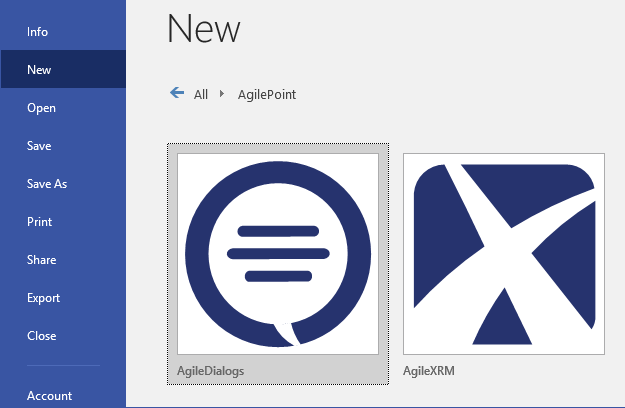 When this template is selected a new AgileDialog is created. The first thing to do is to configure the interaction between the dialog and CRM in XRM Connection window.

In Envision, these stencils contain the shapes specific to AgileDialogs: 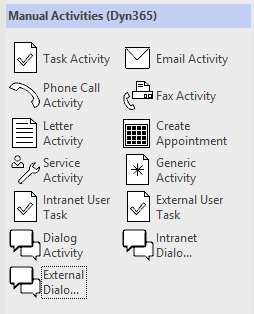 There are 5 shapes in total, four in the XRM AgileDialogs stencil and one in the XRM External Connector stencil:

Apart from these, most shapes in the AgileXRM Automatic Activities stencil can be used in dialog models. The following shapes cannot be used in an AgileDialog model:

Currently the following control types are available, and each type has specific configuration besides the common properties.

Hosting dialogs inside a Portal

The form definition can be exported to an XML file or imported from an XML file using the menu options available in Tools menu: 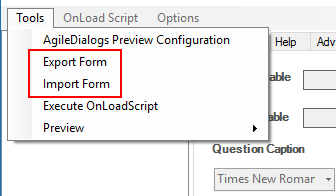 Launching a Dialog using a URL

AgileDialogs can be launched using a URL, there is no need to have an associated XRM record nor an AgileXRM task.

An AgileDialog can be used, for instance, to create a record in XRM helping the user to fill the data avoiding the use of complex forms or to get data to call other system using a web service.

The format of the URL to launch a dialog is:

This URL can be used in portals to allow the users starting dialogs on demand.

In order to make this work, the user must have permission to start instances of the dialog template.

When the dialog is localized and the link must open a specific language, the URL can contain the Locale ID of the language, the format of the URL in this case is:

The value to pass is in the column Decimal Value, for instance for 3082 for Spanish or 1036 for French.

When creating a link to open a dialog it is also possible to specify what to do when the dialog is finished. There are several options based on the use of the query string parameter AfterSubmit:

Sometimes the process modeler needs to send an email to a user with a link to complete a task that consists of a dialog. The email needs to be sent using the Notification mechanism of the Dialog Task shape so that the WorkItem ID can be sent.

The format of this URL is:

AgileDialogs has a mode that will render the UI compatible with the US Government’s Section 508 requirements.

To enable this mode, the URL to initiate the dialog should contain the s508 parameter set to 1:

There are various ways that a dialog may be cancelled:

AgileDialogs that are associated to a task (Dialog Task, Intranet Dialog Task and Internet Dialog Task) can be cancelled by the user if the modeler allows it by setting the Enable Cancelation parameter to true: 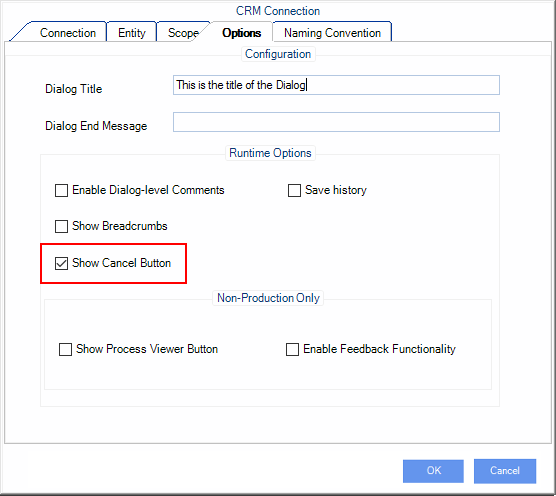 When the dialog is canceled the corresponding task in the parent process is canceled and the process continues.

Dialogs will also be automatically canceled when the Expected Time property which is set at the dialog level is surpassed.

While the dialog is not canceled the user can suspend and open it in the last page whenever he wants.

Dialogs that are run on demand (that is, they are not associated with a task) are automatically canceled when Expected Time parameter of the dialog is exceeded: 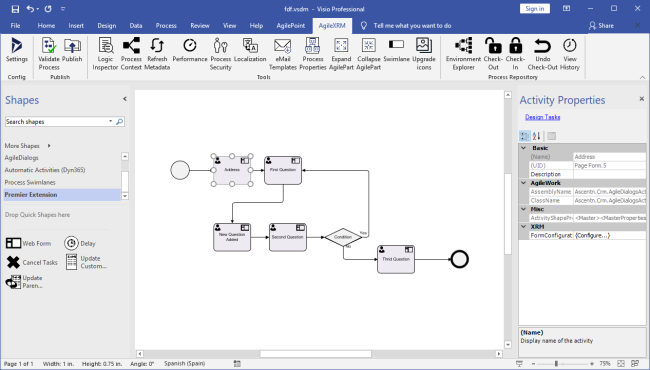